I’ve been thinking about today’s blog all day.  What It Felt Like – “..give the outside world some insight into what it is like to be a bereaved parent by sharing a certain experience..”  I’ve been playing over in my mind what feeling is most important to capture this year.

Do I share about the days leading up to learning Sam had died? The moment we were told his heart was no longer beating? The quiet c-section? Spending four hours with our baby? Saying goodbye to his beautiful body? Planning his funeral? The likeness of walking down the aisle of our wedding to walking down the aisle of Sam’s funeral? Recovering from the c-section? Returning to work when there’s nothing to celebrate? The holidays without a baby? His first birthday? Pregnancy after loss? Losing your second pregnancy to miscarriage?

Hard doesn’t touch the surface of writing this entry but I’ve decided to share about leaving the hospital without Sam and again, two weeks ago today, without Lion.  Because it’s important, my dear readers, to know what it feels like.

When I thought about Sam’s birth as a pregnant woman, it never included his death.  Not in my wildest dreams would it have.  When I imagined the day we would climb into Ted’s car to bring Sam home, I never pictured it without him.

I had all my bags packed, that I subsequently forgot to take with us, when we went to the hospital.  One of which, included mine and Sam’s outfits for going home.  When I was pregnant this is what I thought was important; that we both look good.  How is a new Mom to choose what outfit to dress her newborn baby in?  I couldn’t, so I packed three.

I had always imagined pictures would be taken, especially by me, of our perfect creation in Ted’s backseat.  I would sit in the back with Sam because there’s no doubt I couldn’t take my eyes off of him.  And Ted would drive so slow.  Slower than ever before because he would be responsible for getting his new family home safely.

The hospital room felt especially cold that day.  My brother and Ashley made a few trips to and from our house, taking the week’s worth of personal belongings and flowers back to our home.  I sat in my hospital bed, the only place where I held my baby, watching it all slowly disappear.

It was dark in the room but the sun was shining in through the open blinds.  How could God not let the skies open that day and send the rain to fall to match my endless tears of sadness?  I felt numb and my thoughts were numbered.

Once the room was emptied, it was time to go.  Ted helped me off the bed and I fell heavily into his arms and sobbed.  I wouldn’t know it then but it was the first of many, tiny deaths I’d experience without Sam.  I was saying goodbye once again, this time to the only place we’d ever physically be a family of three.

I crashed into the wheelchair seat and the nurse, through tears, carefully pulled me out of our room.  I kept my head down as we left the Labor and Delivery floor so as not to accidentally catch a glimpse of a new baby or be acknowledged with what’s now a lifetime of sad looks by people who’ve come to know our loss.

Mom, Ted and I went down the elevator in silence.  Sammy the stuffed elephant was cuddled in Sam’s swaddle and close to my chest.  As I was being wheeled down the hallway we passed an elderly woman, also in a wheelchair who exclaimed, “Oh! Well she has a little one!”  Silence.  We later laughed about her mistaken identity of Sammy the elephant for my very real baby whose body wasn’t leaving with me.  I couldn’t have known or appreciated in that moment that she would be one of only a handful of people who would ever congratulate us on the birth of our son.

Ted had prepared for his car to be sitting, waiting for us at the front door of the hospital.  The hospital door opened and warmth flooded over my body as I was wheeled outside.  How would I muster the energy to stand?  How could I leave this building knowing Sam’s body rested alone there in the morgue?  Emptiness.

I was carefully placed into Ted’s car, gently strapped in and the door was shut.  We were really leaving.  We didn’t speak on the way home.  The car started moving and my mind shut down.  There was a new world I hadn’t seen before.  One that kept on moving when my whole life came to a stop.

The drive home was slow and gentle just as I had anticipated.  Except there was no Sam.  Time warped into something very strange that ride home.  Fast and slow intertwined.

Two weeks ago, I knew walking in for my procedure I’d be walking out no longer pregnant and with no baby to hold.  I’m no stranger to leaving the hospital without my baby.  In fact, I have no idea what it feels like to leave with a baby.  Anymore, I wonder if I ever will.

I wanted to walk out this time as opposed to being wheeled out but written in big letters on a bracelet given to me was “Fall Risk”.  I’d once again be wheeled outside, met by the shining sun and gently helped into Ted’s car.  I stood from my wheelchair and wept.  Why does this keep happening?

There’s no past tense in grief.  Leaving the hospital with empty arms wasn’t something we felt and then moved on from; it’s something we feel every.single.day.

Ingrid Michaelson says it well in her song Keep Breathing.

When President Reagan proclaimed October as Pregnancy and Infant Loss Awareness month he said, “When a child loses his parent, they are called an orphan.  When a spouse loses his or her partner, they are called a widow or widower.  When parents lose their child, there isn’t a word to describe them.”  This is just our story.  There are mothers saying goodbye to their children and going home to a quiet house every single day.  We need to care more about them.  We need to give voice to the indescribable.  The world needs to know what it feels like. 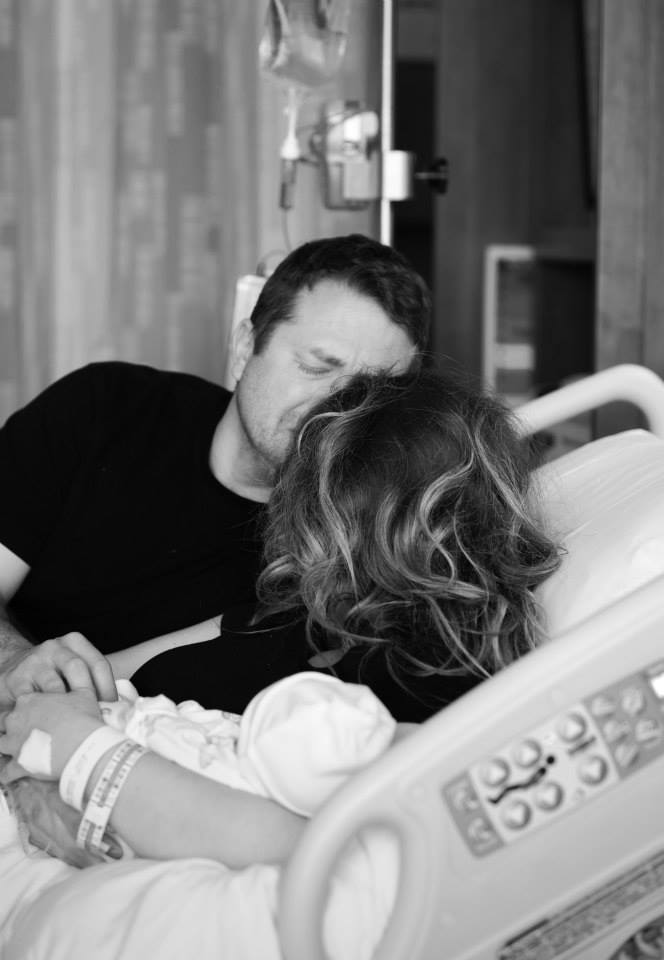 View all posts by abbylnewton