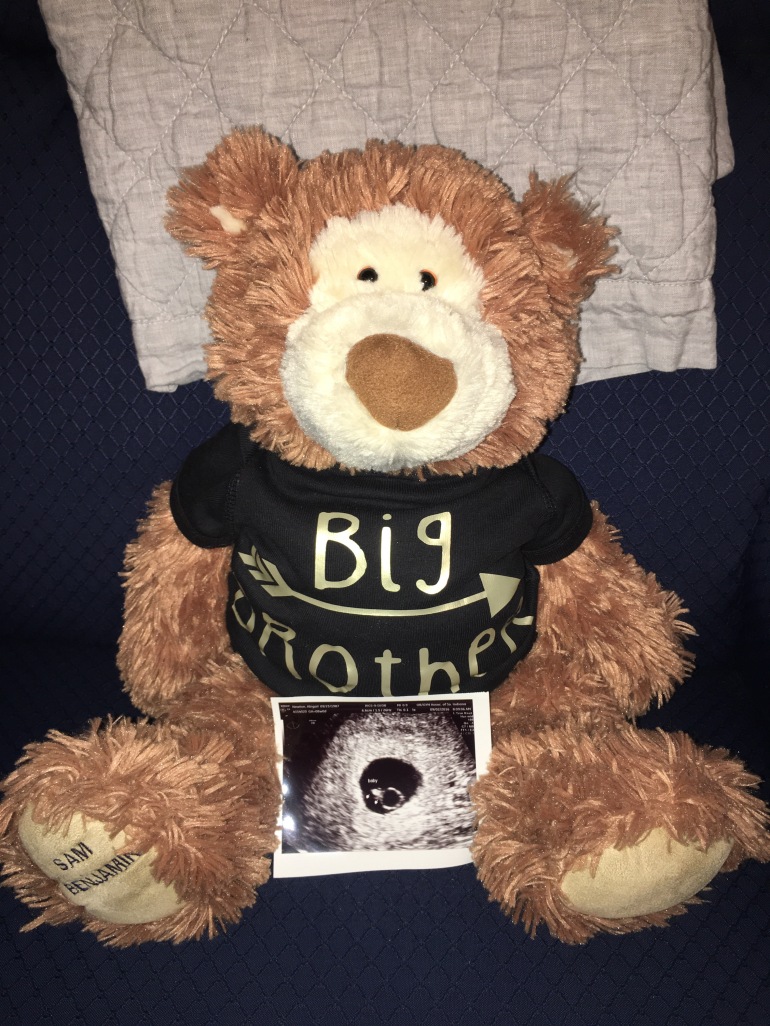 Here it is.  The announcement that never came in the onesie that still did.

I remember scanning pages and pages of big brother onesies that fit newborns.  Most ‘big brother’ shirts only come in t-shirt sizes.  Most Moms only announce their second child after their first has had time to grow.

A black onesie – was it too dark?  I decided I had plans to take Sam Bear outside, surround him in the autumn weather with bright colored leaves, sit him in a painted wooden chair, and find some way for him to be holding balloons, balloons in the shape of a rainbow to be exact.

It’s funny what I allowed myself to place my trust in for the two months I was pregnant with Lion and what I could not.  Birth announcements, yes.  Lion living, no.  Polar opposites.  It makes no sense.  Grief makes no sense.

Last night I was walking by Sam’s room and noticed two balloons deflating and on his floor.  My girlfriend Jenn left them for Sam at his grave.  One said, “thinking of you” and the other “big brother” with the perfect elephant pictured in the center.  I picked them up, put tiny holes in the side so I could throw them away and then stopped; I couldn’t.

I flattened the big brother balloon and placed it in Sam’s crib.  I sat in his room alone and cried.  I remember the day I packed his clothes and moved his dresser out of his room.  It felt right.  Now it feels like something’s missing.  I know it’s not the dresser but I still can’t bring myself to touch his crib.

Ted laid on the floor and listened to my tears.  When I was pregnant with Sam my brother and sister in law welcomed Rhett four months before his birth.  This photo keeps flashing in my mind; me holding Rhett in my arms and Sam in my belly.  Next week, we’ll be welcoming my sweetest niece, Vivienne, and I was confident I’d recreate it with Lion, but I won’t.

I saw two rainbow birth announcements today and one Facebook memory of the sweetest rainbow girl’s birth I had shared on Facebook a year ago today.  I wrote that Mama then and said, “I celebrate with you in such a deep kind of love way.”  And I meant it.  I still do.

But I’ll never understand why I don’t get to have one with Lion.  Why another year is leaving us with an even greater space in our empty arms.

My friend Sara posted to my Facebook last night a picture of a pregnant Mama elephant.  Captioned in the photo was this:

An elephant and a dog became pregnant at same time.  Three months down the line the dog gave birth to six puppies.  Six months later the dog was pregnant again, and nine months on it gave birth to another dozen puppies.  The pattern continued.

On the eighteenth month the dog approached the elephant questioning, “Are you sure that you are pregnant?  We became pregnant on the same date, I have given birth three times to a dozen puppies and they are now grown to become big dogs, yet you are still pregnant.  What’s going on?”.

The elephant replied, “There is something I want you to understand. What I am carrying is not a puppy but an elephant.  I only give birth to one in two years.  When my baby hits the ground, the earth feels it.  When my baby crosses the road, human beings stop and watch in admiration, what I carry draws attention.  So what I’m carrying is mighty and great.

Don’t lose faith when you see others receive answers to their prayers.  ..Say to yourself “My time is coming, and when it hits the surface of the earth, people shall yield in admiration.”

I can’t write that my hope rests that one day we’ll deliver a living baby.  I just can’t.  So now, the desperate cry of my heart is that the earth continues to feel it, Sam and Lion’s presence, for their lives are mighty and great.

View all posts by abbylnewton

Last night I sat down with my (other 😉) guy, Dustin & we recorded a podcast together for the first time in this new year - just us! Tune in for some great conversation on PERSPECTIVE. Are you living life from a perspective of fear or from a perspective of love? {Link in my bio!} #coffeeandteawithdustinandabby #podcast #holistichealing #holistichealth #perspective #fearbasedliving #lovewins #ramdass #buddhism #love #podcasthost #spotify #applepodcast
It's been a really special week in my business!  I hit some goals in just sixteen days into the new year that I had given myself all of 2020 to achieve.  I also became a Certified Master Coach in my nutrition program.  I spent hours watching videos, and then certification videos, two quizzes and an exam so that I could feel equipped to lead my team on their own nutrition journey.⁣⁣ ⁣⁣ ⁣ I was thinking ‪this morning‬ about the wins of this week.  Becoming certified just took discipline.  But advancing in my business isn't really about me at all.  It's about the women who've entrusted their lives with me.  It's about my Coaches who show up every day in their wellness journeys and are working so hard to build their businesses.⁣⁣ ⁣⁣ ⁣ I am thankful for my tribe.  I could have none of the things - and still be completely content because I am in relation with each of you.⁣⁣ 🙏🏻 ⁣⁣ #streamofwellbeing #spartanation #tbbindiana #teambeachbody #iamsoulstrong #gabriellebernstein #risesisterrise #manifesting #manifestingchallenge #january2020 #barreblend #showmeyourattitude #sahm #southernindiana #floydcounty #louisville #portionfix #fixyourlife #upf #shakeology #fiercefemale #findyourfierce #lightworker
That look you give a Super Trainer when he’s standing right in front of you. 😂 📸 caught us, @lauren.book16 🤩 #teambeachbody #supertrainer #tbbindiana #superweekend #amoilacesar #dorks
When a teammate completes her first program with me I feel so many things. Proud, hopeful, inspired, grateful, encouraged, and energized just to name a few. This week my girl Amanda finished her first round of 21 Day Fix Real Time as a teammate of Soul Strong Nation and I could not feel more of all those things. I always ask my girls how they feel after they've completed a program, because to me, THAT is what is most important.⁣ ⁣ ⁣ Amanda told me today she feels awesome and much stronger than she was three weeks ago. What I'm finding in life is that how we feel is what we ARE. There's zero doubt in my mind that Amanda IS awesome and IS strong! I can't wait to spend 2020 & beyond together! 💜Congratulations on this success, Amanda! See you at the Barre! YOU are Soul Strong!⁣ ⁣ ⁣ #21dfrt #21dayfixrealtime #fixyourlife #challengecomplete #risesisterrise #spartanation #teambeachbody #soulstrongnation #2020 #newyear
It’s a BEAUTIFUL day! The sun is shining & my heart is filled with light! ✨ My morning routine was a little wonky today but I listened to my body and slept in! I’m celebrating 🥳 a very productive week in my business & I’ve never felt so motivated as a small business owner! Naturally, today’s card said “Motivated”! I am co-creating with the universe & it feels so good! #streamofwellbeing #spartanation #tbbindiana #teambeachbody #iamsoulstrong #gabriellebernstein #risesisterrise #manifesting #manifestingchallenge #january2020 #barreblend #showmeyourattitude #sahm #southernindiana #floydcounty #louisville #portionfix #fixyourlife #upf #shakeology #fiercefemale #findyourfierce #lightworker
I wish I could share my energy with you.  I hope you can feel it in my writing - in the stories about my life I share.  I wish I could reach through the screen and let you feel a bit of the magic I've felt today. ✨⁣ ⁣ ⁣ As I sit and think about WHY I feel so happy and fulfilled it's because of Beachbody. (I KNOW - I'M OBSESSED) But you all, I am.  And I am UNASHAMED of it.  I proudly own with every cell in my body how empowering it's been in my life.⁣ ⁣ ⁣ Sure -  the workouts have transformed by body, the personal development builds my soul, the nutrition has granted me permission to feel good about my relationship with food but what really makes my soul shine, what REALLY has me obsessed is my community.⁣ ⁣ ⁣ This business IS work.  I do a lot of behind the scenes things that keep me busy and growing.  But the friendships I've created are REAL.  Every time my teammate chooses to share her life with me, gives me a glimpse into her soul, I am reminded WHY I'm doing this.  Because I WANT each of us to feel good, to be confident, and to stand proud in WHO we are.  We hold so much power as human beings simply because we're alive.  And watching others find their fierce is one of the most rewarding things I have ever done.⁣ ⁣ ⁣ Gratitude abounds. ⁣ ⁣ #streamofwellbeing #spartanation #tbbindiana #teambeachbody #iamsoulstrong #gabriellebernstein #risesisterrise #manifesting #manifestingchallenge #january2020 #barreblend #showmeyourattitude #sahm #southernindiana #floydcounty #louisville #portionfix #fixyourlife #upf #shakeology #fiercefemale #findyourfierce #lightworker⁣